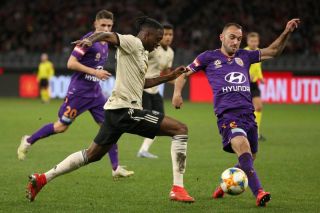 Manchester United have eased into pre-season with a comfortable 2-0 win over Perth Glory in front of 50,206 spectators at Optus Stadium.

It took 60 minutes for the Red Devils to open the scoring as Marcus Rashford finally broke the local side’s defence before James Garner’s low drive doubled the advantage in the closing stages.

Ole Gunnar Solskjaer opted for a mix of youth and experience in his starting line-up with Ashely Young captaining the side, and there was a debut for new signing Daniel James who played on the left wing.

Romelu Lukaku was the notable absentee from the United squad, the official line coming from the club is that the Belgian was rested, while Eric Bailly, Victor Lindelof and Lee Grant were the others not to feature.

Perth Glory, meanwhile, went into the contest without their three top scorers from last season – Andy Keogh, Chris Ikonomidis and Diego Castro – who have all been given extended leave during the A-League off-season.

As expected, United dominated the possession from the off and had their first effort on goal after 60 seconds when Diogo Dalot got forward from right back and blazed high over the crossbar.

Andreas Pereira was next to try his luck with a shot that was straight at Liam Reddy while James was a constant threat for the Glory backline.

Indeed, it was James who was the subject of a robust challenge that gave Young an opportunity from a free kick, but his curling effort hit the side netting.

Anthony Martial was next up, missing the target to the near side, before Jesse Lingard showed quick feet to make space and fire in a shot from 25 yards that was brilliantly tipped over by Glory’s 37-year-old goalkeeper Liam Reddy.

After a goalless first half, Solskjaer changed his entire team with Joel Pereira picked over David De Gea between the posts.

One of the those introduced, Mason Greenwood, had a sight of goal on 51 minutes but dragged his shot wide of the near post.

Glory continued to live dangerously on the edge of their own penalty area and the resistance was finally broken on the hour mark when Paul Pogba’s neat flick found Rashford whose low left foot strike found the corner of the net past Reddy.

Greenwood and Angel Gomes were lively on either wing and the former had another chance on 65 minutes but dragged his shot harmlessly wide.

The A-League side struggled to get out of their half and could only manage to put a few crosses into the United penalty area which were well handled by Pereira.

Glory are coached by former Crystal Palace and Australia defender Tony Popovic and he introduced his two sons to the contest with 15 minutes to go – Gabriel who is just 15 years of age and 17-year-old Kristian.

Luke Shaw was one of those to come on at half time, but he was replaced by Garner on 82 minutes and headed straight for the changing rooms, a similar story to the open training session on Thursday night when he also departed early.

Glory were again caught out in their defensive third and the ball broke to Garner who took one touch before hammering a shot past Tando Velaphi.

Greenwood struck a post and Rojo flashed a cross-cum-shot wide late on, while Glory finished the contest with no shots on target.

Overall, Solskjaer will have been pleased to get game time into 23 of his travelling squad and they take on Leeds United at the same venue on Wednesday night.