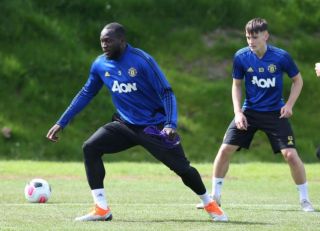 Romelu Lukaku has not made the match day squad to face Perth Glory.

Manchester United kick-start their 2019 pre-season tour with a fixture against the A-League champions.

Lukaku has been strongly linked with an exit from the club this summer and he doesn’t even feature on the bench this afternoon.

BBC reporter Simon Stone claims Lukaku only did bike work during Thursday’s training session, but so did Anthony Martial, who starts!

No Lukaku involved tonight. Only did bike work in Thursday’s open session, as did Martial, who starts. Daniel James also starts. Wan-Bissaka on the bench, as is Pogba.

Lukaku has a 'small niggle'. Left out as a precaution. Should be fit for Wednesday.

BBC also ran a report last night stating that Lukaku now looks likely to stay at United beyond this summer.

That may come as a blow to Inter Milan manager Antonio Conte, who is allegedly keen to work with the Belgian striker after missing out on his signature in 2017 when the Italian wanted him at Chelsea.

Meanwhile, Neil Custis from The Sun has raised an eyebrow following Lukaku’s absence.