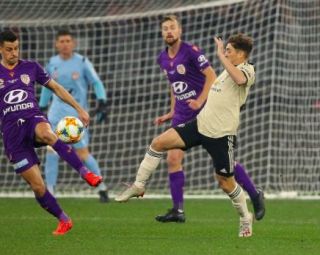 New signing Daniel James has made a promising start in his first game for Manchester United.

The Reds are currently in action against Perth Glory in the first game of the pre-season tour at the Optus Stadium in Australia.

James, who was Ole Gunnar Solskjaer’s first signing as United boss, looked dangerous on both flanks in the first-half.

The Welshman showed glimpses of his lightening pace to consistently get in behind the opposition defence, and delivered several threatening crosses.

United have completely dominated possession in the first-half but have not been able to break down a stubborn Perth defence.

James looks to have settled in well for the Reds and we look forward to seeing more of him before the start of the Premier League season on August 11th.

Solskjaer has confirmed he has selected an entirely new eleven for the first-half so we could next see the youngster during Wednesday’s game against Leeds United, again at the Optus Stadium in Perth.

Check out some reaction to James from some excited Reds below:

One minute in, Daniel James has already had two chances to cross. The second was a sublime delivery that should have been converted. #mufc

Daniel James’ pace is frightening, He’s been a real threat in the opening 13 minutes. #mufc

Dan James is going to be a complete nightmare to defend against isn’t he? He’s had about 4/5 runs ignored so far but he keeps sitting on the last man and runs in behind, so dangerous. Great pressure out of possession too, setting the tone for the others so far 👏 pic.twitter.com/an7mZW71p2

Jesse Lingard & Dan James must be incredibly annoying to play against.

Really impressed with the pressing so early into pre-season, the players are looking fitter. Daniel James looking really bright and Tuanzebe not letting their striker get any luck at all.

Now I’m not one to overreact or anything, but I’m pretty sure that Daniel James is the best football player in the world. ⚡️