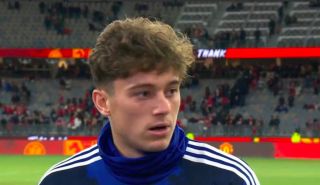 New signing Daniel James described his first appearance in a Manchester United shirt as ‘amazing’ as the Reds strolled to a 2-0 victory over Perth Glory at the Optus Stadium.

The Welshman was United’s stand out player in the first-half, constantly causing problems for the Perth defence.

Speaking to MUTV as quoted by MEN, James said:

“It was amazing, the fans were great today. We put in a great performance and showed what we had been working on and got the result.”

“We have had a great 10 days we have been working on certain things, that’s what we have got to bring to the game, first half we had a few chances we could have put away but we showed in the second half we were clinical.”

As mentioned by James, the Reds lacked cutting edge in the first-half of the game, and failed to break down the resistant Perth defence. James threatened with his electric pace down the left, but it was left to the second-half team to win the game.

Academy graduates Marcus Rashford and James Garner were both on the scoresheet as the Australian outfit tired in the second half.

James’ performance was one of the most impressive during the game, as well as other new signing Aaron Wan-Bissaka who both shone in their first games for the club.  The winger earned the man of the match award by fans who were clearly excited by the youngster’s performance.

We will next get to see the pair in action against Leeds United on Wednesday.

Thankfully, we managed to catch up with today's star man for a quick chat after the game… but only just 😅#MUFC #MUTOUR 🇦🇺 pic.twitter.com/1NwnqZ6iBS