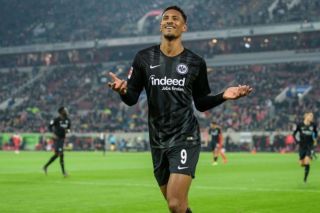 It was suggested already this summer that Eintracht Frankfurt striker Sebastien Haller had been identified as the player Manchester United want to replace Romelu Lukaku.

That was according to the Daily Mail, who said United will target Haller as a back-up striker to Marcus Rashford. He was allegedly viewed as a potential plan B and impact substitute.

But the latest on Haller doesn’t involve MUFC at all…

West Ham have opened negotiations with the Bundesliga club over a possible deal for the forward, as per Sky Sports.

The 25-year-old scored 20 goals in 40 appearances for the German side last season, building on a formidable strike partnership with Luka Jovic, who completed a transfer to Real Madrid this summer.

Haller’s entourage are expected in London for talks in the coming days.

United are hardly arsed about losing out on Haller if they’re prepared to let him join the Hammers without any competition.

The Red Devils have made just two signings this summer, with Aaron Wan-Bissaka joining from Crystal Palace and Daniel James from Swansea City.