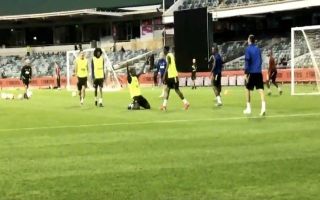 Paul Pogba scored a goal after painfully deflecting an Ashley Young drive into the net during a recent training session in Perth, Australia.

The Red Devils are currently preparing for their first pre-season friendly against Perth Glory on Saturday.

There has been ongoing transfer rumours surrounding World Cup-winner Pogba.

Goal claims the France international is wanted by Real Madrid, but United don’t want to sell their most prized asset as Ole Gunnar Solskjaer tries to build his squad.

He was left floored after a hilarious incident in training.

Young smashes the ball at Pogba, only for the ball to bounce off the midfielder and into the net.

Check out Pogba’s bizarre goal below, as per Twitter: