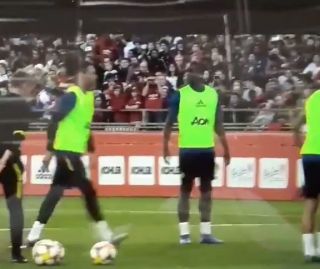 The players are currently in Australia for pre-season preparations.

Manchester United will face Perth Glory on Saturday in their first pre-season friendly of the summer.

The A-League champions will hopefully give the lads the sort of test they need in their opening pre-season fixture when it’s about players getting game time more so than the result.

Manager Ole Gunnar Solskjaer is busy putting the players through their paces ahead of the new Premier League, and a hilarious video featuring Paul Pogba and Chris Smalling has done the rounds online.

The players were in the middle of conducting a training drill called ‘rondo’, which sees them pass the ball in tight areas, like an intense game of piggy in the middle.

Smalling loses the ball and Pogba gives him a look that could kill.

look at Pogba reaction to Smalling giving it away in rondo 😭 pic.twitter.com/wZxAj31sWC

Now that it’s set to go viral on social media, Smalling will be made a aware of Pogba’s expression despite appearing to miss it initially.