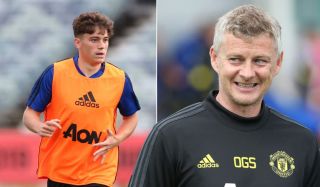 Ole Gunnar Solskjaer is looking forward to unleashing his speedsters against Perth Glory on Saturday.

The Red Devils take on the A-League champions in their first pre-season friendly of the 2019 tour.

United have signed just two player after missing out on Champions League qualification.

Daniel James arrived from Swansea City last month, while Aaron Wan-Bissaka followed from Crystal Palace. They’re both training and settling in with their new team-mates in Perth, Australia.

Solskjaer has been impressed by the way in which James has quickly adapted to his new surroundings and is clearly blown away by his pace.

But right-back Wan-Bissaka doesn’t appear to be a slouch either.

‘Is anyone faster than James? Maybe Wan-Bissaka,’ Solskjaer said, as per The Metro. ‘The two of them do have top, top speed.

‘Modern football is stop-start, it is go again, speed, tempo, quality, so those two have put their marker down. Of course, with our boys, we have got some quick ones.

‘It doesn’t matter if they are English, Norwegian, French, Brazilians, you just want good players, good people, quality and speed of course is a big thing in football nowadays.

‘The more X Factors you have in a team, the better you are. Any player who plays against, say, Rashford, Martial, Dan James, with the pace they have got, I think you are worried that they can hurt you – even if they have an off day.’

With just two signings, United don’t look entirely different to the team that disappointed last term, with the exception of Ander Herrera leaving after his contract expired.

But I’d welcome more pace going forward — as long as there’s quality in the team to make use of it.