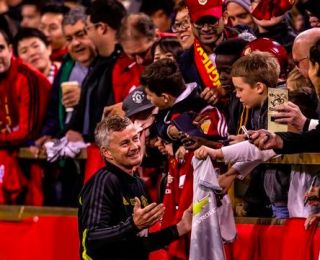 Manchester United face an understrength Perth Glory at the Optus Stadium tomorrow in the club’s first game of their summer tour.

Australian A-League plate winners Perth are said to have been hit by an injury crisis and face six of their key stars missing the game against the Reds.

This has meant that several academy youngsters are set to be given the chance to play United.

According to the Telegraph, 15-year-old prodigies Gabriel Popovic, the son of coach Tony Popovic, and Joshua Rawlins could feature against the Reds; both players are currently enjoying their school holidays.

This is a fantastic opportunity for some of Perth’s young kids to come against such a high-profile Premier League outfit.

However, despite the likelihood of Ole Gunnar Solskjaer’s side starting rustily in the game, the lack of first-team opposition from Perth should make the result part relatively predictable tomorrow.

We hope to see a few goals for the Reds and Solskjaer giving minutes to young stars such as Angel Gomes, Mason Greenwood and Axel Tuanzebe.

This game could also give fans their first chance to see new signings Aaron Wan-Bissaka and Daniel James in a United shirt. It will be interesting to see how they are deployed by Solskjaer and how they begin to settle in to the team, albeit in the first pre-season game of the tour.