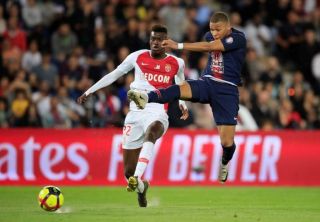 According to reports in France, Manchester United have shown an interest in Monaco centre-back Benoit Badiashile.

The Reds desperately need a new central defender this summer and  L’Equipe , as translated by Sport Witness report that the youngster is being considered with no progress in moves for targets Harry Maguire from Leicester and Issa Diop from West Ham.

The report claims Wolves have also shown an interest in the 18-year-old defender, who is said to have been tracked by United for several years now.

United have reportedly ‘positioned’ themselves to complete the Frenchman’s signing, despite the youngster only having played 36 times for the Ligue 1 side so far.

Monaco are said to be asking for €35m for Badiashile, who has shown promising signs in the early days of his career in France.

The asking price is significantly less then that of other defenders they have been linked with this summer, and fits manager Ole Gunnar Solskjaer’s mould of young talent he looks to be targeting.

However, Solskjaer requires a more established centre-back this summer to partner Victor Lindelof in defence next season. Rather than signing the young Monaco talent, it would be good to see how academy product Axel Tuanzebe can perform at the club next season.