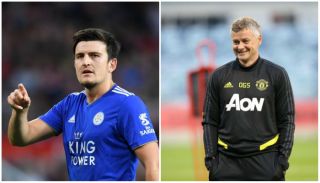 It sounds like Manchester United will walk away from negotiations with Leicester City over the potential signing of Harry Maguire.

A massive blow for Maguire knowing this summer he could have joined the 20-times champions of England this summer, but the Foxes have a ridiculous price tag on his head and United are reportedly refusing to meet their transfer demands.

The Evening Standard claims the United board are not prepared to pay out £90m to sign Maguire this summer.

Maguire first emerged as a United target last year with José Mourinho eager to strengthen his defence, but the Red Devils went the entire summer without signing a much needed centre-back.

Current manager Ole Gunnar Solskjaer has now been tasked with bolstering the defence and has already added full-back Aaron Wan-Bissaka to his squad following a Premier League switch from Crystal Palace.

But it’s a top centre-back he desperately needs now and United seem to be linked with a move for Maguire on a daily basis. Other defensive targets aren’t quite getting the same publicity in the gossip columns.

Just sign him up. Forget about Maguire FFS. https://t.co/z32VJfOrjZ

So, interest in Maguire does seem very real but I do hope United don’t go spending anything between £70m-90m for the England international.

He’s good but not THAT good…