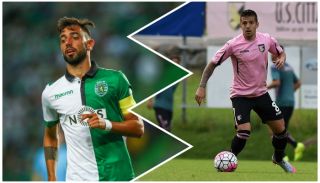 Good news for Manchester United and the ongoing pursuit of midfielder Bruno Fernandes as Sporting Lisbon have lined up his replacement, a report claims.

According to Italian journalists Alfredo Pedulla, the Portuguese side are chasing Palermo’s Aleksandar Trajkovski as his potential replacement.

There has been speculation about Fernandes joining United since the transfer window opened, but so far the Reds are yet to make an official approach for the player but he is said to be “calm” about the situation, as reportedly by Correio da Manha via The Sun.

United are understood to be “formulating a proposal” for the Portugal international, who is said to be confident of completing his switch to Old Trafford.

Fernandes could be a potential replacement for wantaway midfielder Paul Pogba, but we should be looking to sign him even if the Frenchman remains at the club. United have lost Ander Herrera and Marounae Fellaini in the past year and need more quality in midfield.

The report also states that Trajkovski is expected to sign a four-year contract with Sporting and it could soon become official.