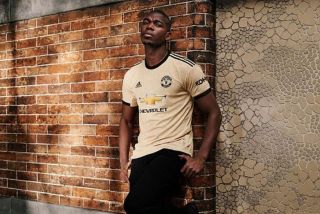 The new Manchester United away kit for 2019/20 apparently takes inspiration from the Northern Quarter in Manchester.

The colour of the kit has been described by Adidas as ‘Savannah’, although leaks beforehand had fans describe it as snake skin, perhaps fitting to certain members of the squad.

It will be worn by Ole Gunnar Solskjaer’s side for the first time on Saturday as United kick-start their pre-season tour with a friendly match against A-League champions Perth Glory.

A beige colour, to use the more simplistic term, it’s the first time United have donned such a shirt.

Among the players modelling the latest release, Paul Pogba poses in the new shirt despite being strongly linked with an Old Trafford exit this summer.

It is already on sale from the official club store

Man United's away kit is here…. and it's different 👀 pic.twitter.com/yiGtVsBTHS

United have yet to release a third kit for next season.