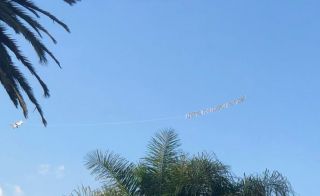 Manchester United do not need reminding that Liverpool won their sixth Champions League last year, beating Tottenham in the final in Madrid.

Us Reds have managed to get through the summer and are trying to forget about it, but this hasn’t stopped some Liverpool fans flying their own message over the club’s training camp in Australia.

Perhaps Liverpool fans are due a reminder of the last time they won a Premier League trophy since they are putting in such an effort to boast about their recent success.

United play Liverpool on the 19th October this season and we hope the Reds can make inroads on the current gap between the two sides.

The Reds are preparing for Saturday’s first pre-season game of the tour against Perth Glory where we will hopefully get a glimpse of our signings, Daniel James and Aaron Wan-Bissaka.

Some Liverpool fans appear to have offered their own welcome to United… 👀#MUTOUR pic.twitter.com/ATBgx2qauT