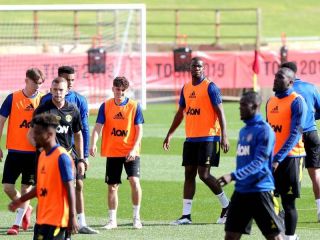 Manchester United’s pre-season tour for 2019 gets underway on Saturday with a friendly against Australian side Perth Glory.

The Red Devils take on the A-League champions with new signings Aaron Wan-Bissaka and Daniel James both expecting to make their first appearance for the club.

Manager Ole Gunnar Solskjaer got a bit of a hammering at his first press conference of the tour, with talk of United’s lack of transfer activity and Paul Pogba’s future taking over the questions.

Some fans claimed he came across as a Glazer puppet, which is a very harsh label to pin on the United legend for trying to make the most of a bad situation.

A year ago from now, José Mourinho took his squad on a pre-season tour of the United States and it was an absolute disaster. Unhappy with the work of executive vice-chairman Ed Woodward, who was ‘too busy’ to take calls from the Portuguese coach, according to sources close to Stretty News, Mourinho modelled a dour demeanour and it rubbed off negatively on the squad.

So, for doing something a little different and trying to keep the camp happy, Solskjaer is getting slagged off. He’s trying to unite the people that matter — players and coaching staff — in order to have a good go next season. Hopefully he succeeds and our transfer activity picks up soon.

The result hardly matters, we just want to ensure everyone gets a good workout and escapes injury free.

Being the champions of Australia, Perth Glory should be able to give our lads a challenge because they will be more alert with greater match fitness but fans watching the pre-season tour will notice fitness levels rise with each game.

The match will be shown live on MUTV in the UK, though an MUTV subscription is required. Many United fans have cancelled their subscription due to the #GlazersOut trend which has been very popular online.