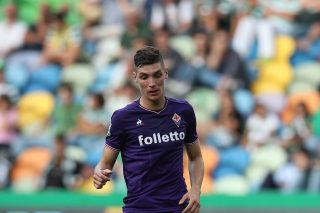 Manchester United have reportedly made an enquiry to Fiorentina for 21-year-old defender Nikola Milenkovic.

Gianluca Di Marzio reports that the Reds have already made an offer for the Serbian in January but could not meet the Serie A club’s valuation for the highly-rated centre back.

Di Marzio’s report claims that United bid €40m for Milenkovic in the January window but had their offer rejected as Fiorentina are said to be holding out for €50m for their young defender.

The latest is that two days ago United reportedly made another enquiry for the 21-year-old, who Fiorentina are reluctant to sell this summer.

Manager Ole Gunnar Solskjaer desperately needs a central defender with just under a month remaining in the current window.

Milenkovic is a younger, and cheaper alternative to some centre-backs the Reds have been linked with including Harry Maguire and Kalidou Koulibaly.

At 6ft5, the Serbian international is a commanding presence and strong in the air which the club have been lacking for some time now in defence. Solskjaer cannot rely on the likes of Phil Jones and Chris Smalling for another season and Milenkovic would fit the mould of young talent that he looks to be acquiring.

However with young defenders Axel Tuanzebe and Victor Lindelof already at Old Trafford, an established and more experienced centre-back could be more useful to target this summer.