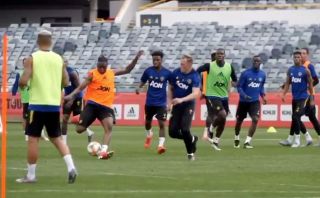 Most of us can’t help but get excited when the club makes a new signing. To see him in action and hoping whoever it is goes on to be a star at Manchester United, a player we will reminisce about one day.

Aaron Wan-Bissaka is settling into life as a United player after joining the club this summer following a transfer from Crystal Palace.

The England U21 international had a terrific breakthrough campaign at Selhurst Park last season and it led to solid interest from the Red Devils.

Now on pre-season tour with his new team-mates in Australia, Wan-Bissaka was caught on camera sending Phil Jones to the market, or as one Twitter user (@CallumD42554886) said: ‘Wan-Bissaka sent Jones for a pasty in Perth.’

The full-back appears to dummy a shot which Jones commits to… showing off the sort of defending we can expect if United don’t sign a top defender this summer.

But it’s good to see Wan-Bissaka showing these signings in training. For a player who has been slated by some for his lack of ability going forward, he doesn’t look short in the skills department and it gives hope that Ole Gunnar Solskjaer can work on aspects of his game deemed weaker than others.

Watch the clip below, even if it will make you feel a bit embarrassed for Jonesy.

Wan-Bissaka sent Jones for a pasty in Perth pic.twitter.com/unIJhn8MFS

Moreover, I can’t wait to see Wan-Bissaka play his first game for United.

He is expected to make an appearance on Saturday against Perth Glory in a pre-season friendly.