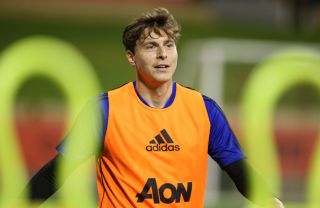 Victor Lindelof’s transformation from boy to man at Manchester United has been mightily impressive and one of the few bright sparks over the last couple of years in what has been an overall tumultuous period for the club.

Apologies in advance, but cast your minds back to that fateful defeat at Huddersfield Town in their debut season in the Premier League for a brief second: Their second goal stemmed only required three touches from goalkeeper to striker, all because Lindelof allowed the ball to bounce – a cardinal sin at any level of the game, let alone the cut throat Premier League. United left not only empty handed but with egg on their face, in particular Lindelof tied his hood tightly around his head perhaps to avoid the snappers desperate to capture the guilty party on camera but also to mask the embarrassment etched on his face at his horror show.

The French poet Victor Hugo famously wrote, adversity makes men, and prosperity makes monsters, well Lindelof certainly adds weight to the former – he has emerged from his West Yorkshire nightmare and, in my estimation, has been one of the most improved centre backs in England, alongside Aymeric Laporte.

Some of you may be thinking, United’s defence was uncharacteristically porous last year, so how can this guy be championing Lindelof, a mainstay in said defence, as a ray of light amidst incredibly dismal times? Well, his transformation has been so drastic, that’s why. The shell that he was cowering under in 2017 has well and truly disappeared, he has gone from looking like the too nervous to speak last pick to being the chief organiser and talker at the back. That has bred a confidence from making the position his own, getting used to the aesthetics of the English game and knowing what it takes physically and mentally to succeed at this level.

For all our rightful bemoaning of the likes of Jones, Smalling and Rojo, we have a cracking, young defender on our hands in Victor Lindelof and I would strongly argue that he, and David De Gea, deserve another quality centre back to enhance our chances of success and building from the back. You think back to any generation, or successful title winning side, the cornerstone of all of those will undoubtedly be a rock solid centre back pairing: Ferdinand and Vidic, Adams and Keown/Bould, Terry and Carvalho/Cahill, even Huth and Morgan. You just do not get that same feel with any of the centre backs named above on United’s books. In truth, those defenders were elevated by the abilities and reassurances invariably given by Ferdinand and/or Vidic. I do feel Lindelof could one day get to those levels, he just needs help back there.

Signed from Benfica in 2017 on a four year deal, with the increasingly customary option for an extra year, Lindelof has now been at the club for two seasons so, you could argue, is approaching a critical juncture in his United career. We have seen the likes of Rashford, Tuanzebe and Pereira all signed up for a few years more, with strong talk of De Gea following  suit at long last. The chief reason for this piece was that we should make securing Lindelof’s long term future an absolute priority too. There is a good reason for this too…

Barcelona are reportedly circling, as per The Guardian.

Having seemingly missed out on the signing of Matthijs De Ligt, Lindelof, according to some Spanish outlets such as Marca, is now under consideration as a potential new signing at the Camp Nou. If ever there was an incentive or motivation to tie him down, they don’t come as big as that. You can see why Barcelona would be in the market too: Gerard Pique, as brilliant as ever, is not getting any younger and Lindelof possesses similar qualities: composure, reading of the game, cool on the ball and good in possession into midfield.

To ensure mass relief, for the time being, it is widely reported that United swiftly rebuffed any advances the Catalonians made. As well they did too, hell we have our own issues at the back to sort and Lindelof is sure to be a big part of this rebuild. He is the symbol of the identity Ole Gunnar Solskjaer is trying to implement going forward: Young, hungry, committed and talented players at the heart of the club. There will always be conjecture and divided fan opinion on who should don the armband of our great club. Paul Pogba has been mentioned, De Gea too, but can Lindelof realistically be left out of the reckoning, given how he is en route to becoming the defender Jose Mourinho earmarked on signing him?

Some might say, relax Lindelof still has two years left on his existing deal but, in terms of statements and some of the contracts given out previously, Lindelof unequivocally deserves the reward and recognition as he is levels above the likes of Jones, Smalling and Rojo, all of whom have penned new deals at various stages of these last troublesome eighteen months.

The deservingly christened ‘ice man’ goes from strength to strength, now how about he gets a new partner and a new deal, Ed?