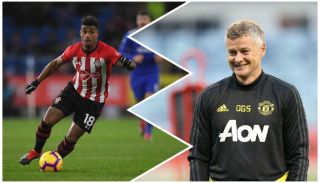 Mario Lemina arrived at Southampton as a hot prospect, but it’s underwhelming that Manchester United are reportedly willing to take a punt on him despite the fact he’s yet to really light up the Premier League.

United are staring at the possibility of losing a World Cup winner in Paul Pogba, so you’d imagine Ole Gunnar Solskjaer would be in the market for midfielders better than Lemina or Newcastle’s Sean Longstaff.

We seem to be shopping in the ‘best offers’ section, scrapping for loose change. The sort of bullsh*t we’ve had to deal with ever since the Glazers took over in 2005.

According to The Times, United officials have been given permission to speak with the Saints midfielder. It is understood that Lemina is looking to move elsewhere in the coming weeks.

No way would he have thought Manchester United would come knocking for him this summer. Most people had a ‘what the f*ck’ expression on their face when a potential transfer was initially reported and it looks like the story has legs.

I’m not criticising Lemina as a player but United should be aiming higher. I’d be fine if he was to come in as an option like Marouane Fellaini and Ander Herrera, who both left the club in the last year, but we should be signing better players to rule the roost in the centre of the pitch.

WhoScored gave Lemina an rating average of 6.85 in his 21 league appearances for Southampton lasy season.

The Gabonese midfield prefers a switch to United over Arsenal, as per The Metro, which sees the Red Devils positioned as front runners for his signature.

A predicted price tag of somewhere around £20m should see this deal as one worth taking a risk on, but Lemina is not the ultimate solution to our problems in midfield.

Lemina could do a job as a squad player but I serious doubt he’d bring more to the table than that, and it feels like we could be adding more players to the team who will later be considered ‘deadwood’.