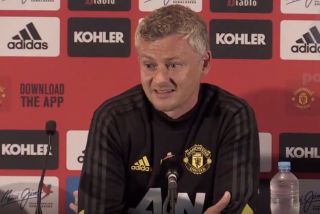 It appears as though Manchester United manager Ole Gunnar Solskjaer is already feeling the heat, if the reaction from a number of fans on Twitter is anything to go by.

After putting together a hugely impressive run as caretaker boss, the Red Devils suffered a huge dip in form towards the end of last season and Solskjaer has been tasked with rebuilding the squad to achieve success in the future.

It’s not good reading tweets about Solskjaer, a club legend, getting sacked before Christmas but several surfaced today following his first press conference of the pre-season tour in Australia.

He rubbed up a lot of supporters the wrong way with his defence of Paul Pogba, as well as some other comments.

Pogba and his agent Mino Raiola have done their utmost to shame the club into making a decision they don’t need to make.

“We are Man United – we don’t have to sell players” – Ole Gunnar Solskjaer on #MUFC transfer speculation, Paul Pogba & the supposed bust-up with Jesse Lingard pic.twitter.com/2cPDZK2SAq

Solskjaer even hit out at criticism of Pogba, bizarrely suggesting there’s a media agenda against him.

More complaints came when the 46-year-old said he’s happy with his squad despite previously stating otherwise.

Here’s how some United fans reacted to today’s presser.

I’ll say it now – Solskjaer might be a club legend but he is a weak Manage and will be gone before Christmas.

You can’t defend a fucked up player like that Ole! https://t.co/HwomqsTKXi

When Solskjaer is sacked by Christmas he will only have himself to blame https://t.co/rB0wF54RrO

Ole is the snake at United,i remember him saying i would be successful,and some of these players wouldn’t be here?Now he’s trusting same players?hahahaha #deluded

Very worrying looks like Woodward has got to ole already! Absolute joke ole will fail if he doesn’t stand up for what we need if he loves the club he won’t allow Woodward to ruin this club

Solskjaer has new position in MUFC now as Glaziers ventriloquist’s dummy. Totally out of his depth, he’ll be gone this season and Glaziers will still be totally in control, making more and more money. United fans are so gullible and accept second best.

At the end of last season Solskjær said, “I’m going to be successful at this club. There will be some players that won’t enjoy that success with me” and “You’ve seen the last of some players at the club”. Now all of a sudden he has faith in those same players. What changed?