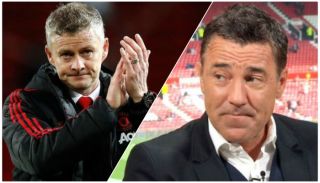 Former Liverpool striker Dean Saunders has named his top four for the 2019/20 Premier League season – tipping Manchester United to miss out on a Champions League spot for a consecutive year.

Of course, having previously played for the Scousers, Saunders is trying to get one up on United as predicting next season’s top four this year is a bit stupid.

It’s far too early for that not knowing which players each club will sign between now and the end of the transfer market. United have two deals done thus far – Daniel James and Aaron Wan-Bissaka – and are soon expected to make more.

The competition at the top is close and Saunders had his premature say on Tuesday’s Sports Breakfast (talkSPORT).

The Welshman said: “If you’re asking me now, and it could change with who they sign and who they let go…

“I would say, Man City, Liverpool and Spurs – there’s my top three.

“And I think Arsenal will get into fourth as we speak.

“I think Chelsea are in a bit of a mess, and Manchester United are in a massive mess.”

I’d hope by the time the season starts we’re in a stronger position than Chelsea to finish in the top four. They had been sanctioned with a transfer ban this summer and can’t bring any players in, so this should be our chance to make ground on Frank Lampard’s side going into the upcoming Premier League campaign.

But then you look at United this summer and can’t help but it’s been underwhelming.

No technical director in place and two young signings, with one who has never played top-flight football.

They could turn out to be fantastic United players but I expected more at this point.

A lot of the deadwood remains too!