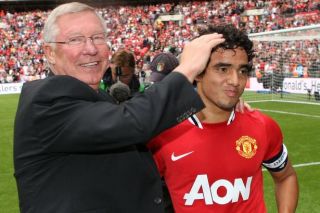 We caught up with Lyon full-back Rafael Da Silva to have a chat about his time at Manchester United. A time he thoroughly cherishes and speaks about with great pride.

The level of pride he displayed on the pitch during his time at United, but Rafael has no problem admitting he was rash at times and had to learn from his mistakes.

Sir Alex Ferguson had an everlasting influence on Rafael, I think as a person as well as a footballer.

Rafael’s bond with his twin Fabio — now playing for Nantes — remains strong. They’re both living in France and still live with each other whenever they return to Brazil.

Sit back, grab yourself a cuppa and enjoy our conversation with Rafael. He buzzes off Manchester United just like we do as fans.

Tell us about your first season in Manchester after leaving Fluminese?

“It went good for me but not so good for my brother. There were many injuries with Gary Neville and Wes Brown, so I had the chance to play and I think I take it by playing many games.”

So, it was important for you and Fabio to have one another’s support in Manchester after moving there from Brazil at such a young age?

“Of course, of course. We always help each other and that is something we will do for life. That’s why we live together in Brazil when we go. We are very close.”

It’s rare to see two brothers – not to mention twins – play for the same club at the same time. But this was Manchester United…

Gary Neville and Phil Neville can also boast about being brothers playing for United, but they’re not exactly twins (laughs)…

You liked to get forward as a full-back but started playing for United during a time flying full-backs weren’t celebrated as much in the Premier League. Is that frustrating?

“Well, it’s not really frustrating because with Sir Alex Ferguson he always tells you to attack. Of course, we had games when he’d tell me to be careful and not get too forward. But he would never say ‘in this game we’re going to defend.’ He knew we were attacking full-backs so he knew what we could do going forward. I always had this freedom and I think it helped me a lot.”

How would you describe Manchester United to someone back in Brazil?

“Firstly, I would describe Manchester United as a home. Manchester United was my home and it’s still my home because of how the fans still talk about me. It’s a very, very big club and before you go you must know that it’s one of the biggest clubs in the world and they are going to help you.

“I don’t know how it is now – but there are a lot of people still there. Ole [Gunner Solskjaer] has come back and he will do everything to help you play better. They’re not going to kill; if you are a professional you must be professional and do all the things well. Some people have trouble with the weather or the language but they are going to help you.”

Have you or Fabio ever pretended to be each other to avoid suspension, or just to play tricks on Fergie?

“Nah,” he says laughing. “If we got caught we would be in trouble so I never even thought about it.”

Did you ever get the hairdryer treatment?

“Of course but I don’t remember a big episode. Like anyone, I’m not the perfect guy and have done silly things. He would just say ‘Oi, don’t do that’ because even if you like the player you must speak out [and correct them].”

You enjoyed the games against Liverpool and City, but which encounter meant more to Rafael Da Silva?

“I always loved playing against Liverpool. You have chills before kick-off and you get chills again when you win those games. That’s what it was like for me facing Liverpool.”

Rafael reveals something about when we lost 3-0 at home to Liverpool, in 2014.

“My boy was just born that day and I wasn’t happy. It’s crazy but I wasn’t happy because we lost 3-0, so that’s something I will take with me for life. That’s why I will say Liverpool [not City] for me. I won’t say it was like a war because ‘war’ is a strong word but I just hated losing against them.

“I loved to win so the game I scored a beautiful goal against them will stay with me for the rest of my life.”

You witnessed life at United post-Ferguson – when David Moyes came in, then Louis van Gaal. Was the atmosphere dependant on the manager?

“It was always going to change. Ferguson was there 26 years and then just two months before the end of the season he announces that he’s going to retire. It was a struggle for everyone because we all got a big surprise. Moyes had these problems because obviously he is going to do somethings differently to the previous manager. Then you have players and staff used to the old methods saying ‘no, why are you doing that? It was better when Ferguson was here.’ There were comparisons made all of the time which isn’t good because Ferguson was the best coach in the world.”

Do you think Solskjaer will get United back winning trophies again?

“Yes, I think and I hope so. I love Ole. I think he’s the right guy to make this club Manchester United again and bring us back where we belong.”

What do you miss most about playing football in England?

“I miss the tackles and the atmosphere. It’s different in France because when you tackle they don’t always celebrate and I love to tackle everyone. I remember putting in tackles at Old Trafford and hearing the screaming which made me very happy.

“I learned a lot and know I was a little bit rash at times. There are some games that are more difficult when it comes to controlling yourself because you are involved in everything and you play with passion. I learned a lot from my mistakes.”

What goes through your mind when you first play at Old Trafford and do you think that feeling is the same for new players joining United now?

“Everything went through my mind when I played my first game at Old Trafford. I just couldn’t believe I was playing there. I don’t tell a lot of people this but after I played my first game I arrived home and took a shower. Then I stood in front of the mirror and told myself, ‘I am going to be a good player for Manchester United.’ I was so focused to be good and to try my best.”

Any advice for Aaron Wan-Bissaka?

“I have heard a lot of good things about him. From him – being a young right-back joining Manchester United – I just say give everything. He must play with confidence because he is playing with the best club in the world. Do you best but remember you must also enjoy playing for the best club in the world, to play football with love and passion. I heard he has passion which is very important.”

Have you thought about life after football?

“I’ve always said that I wanted to work for Manchester United as a scout or something. This could happen – I think I might start doing my coaching badges.”

On that note, who would make a better football manager: Rafael or Fabio?

So, in the future we’ll be expecting to see you and Fabio Da Silva in the Old Trafford dugout and leading the Reds to silverware?

“That would be brilliant! Imagine that! [laughs]”