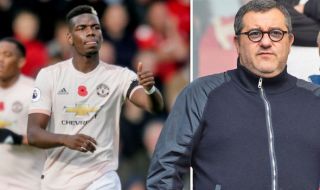 Mino Raiola insists Paul Pogba ‘has done nothing wrong’ and is hopeful his client will soon be granted his wish to leave Manchester United.

In an exclusive statement released to talkSPORT’s Jim White on Tuesday afternoon, Raiola claimed United have been aware for a long time of Pogba’s desire to leave Old Trafford after returning to the club in 2016.

READ MORE: Southampton flop left out of pre-season squad and a target for Arsenal & Man Utd

He also accuses the club of not taking any position against false information being spread about his client.

“The player [Pogba] has done nothing wrong,” said Raiola on talkSPORT. “He has been respectful and professional in every way and always.

“The club has known his feeling for a long time.

“It is a shame other people only like to criticise without the right information, and I am also sorry that the club does not take any position against this.

“Hopefully there will be soon a satisfying solution for all parties.”

Pogba has not yet forced an exit, but he is using his agent to unsettle United in the transfer market.

It seems they’ve forgotten the fact the World Cup winner is still under contract and the lack of respect is astounding.

I’d welcome the sale of Pogba this summer if it meant Ole Gunnar Solskjaer could dip into a greater transfer kitty, but how can we trust the Glazers after seeing the Cristiano Ronaldo money in 2009 go missing?

The fact that Pogba is still under contract means United have total power of the situation. Unless we receive a bid that we deem acceptable, why should the Red Devils allow him leave prematurely?

As Raiola alludes to, a satisfying deal for all parties.

All doesn’t consist of just Raiola and Pogba.