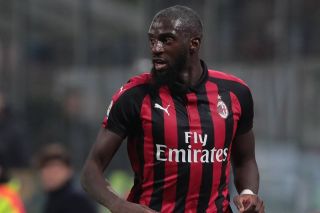 Manchester United supporters have been waiting impatiently for reinforcements in the midfield area this summer. Ander Herrera has departed on a free to PSG, Nemanja Matic has now been christened with the comical, yet wholly accurate nickname ‘Static Matic’ and, much like saying water is wet, Paul Pogba has been linked with a move away.

That leaves the remaining midfielders of Scott McTominay, an inconsistent and erratic Fred and Andreas Pereira. The need for recruits in the engine room is clear for all to see, irrespective of whether Pogba eventually sulks his way to his next move. If United want to re-establish themselves among England’s elite, they need a squad capable of competing on all fronts.

Hence the impatience. Bruno Fernandes of Sporting Lisbon is supposed to be hellbent on signing for United, yet those negotiations appear to have taken all window and remain unresolved. Youri Tielemans has now signed for Leicester City and Tanguy N’Dombele went to Tottenham for a club record fee. Yes, United have identified two promising talents in Daniel James and Aaron Wan-Bissaka, but fans will not be content until a centre back and one or two central midfielders are signed.

United and transfer windows are a journalist’s dream, in that so many names, regardless of plausibility, get launched at United’s direction as it is a guaranteed story seller and discussion point.

The latest from the press is one that would surely not have figured high in anybody’s wish list: Chelsea’s Tiemoue Bakayoko, as per The Sun.

Chelsea did not hesitate in sending the Frenchman to AC Milan last season, in almost a restoration attempt. Overall, he had a decent season in Italy but not so spellbinding to make you take notice and think Chelsea made an aberration in letting him go.

It says a lot that United are linked to guys who have started only nine games for Newcastle, have had two injury hit seasons at Southampton and a previous Chelsea flop.

Bakayoko had a nightmare first season in England: One of Chelsea’s matches at Watford saw Bakayoko dismissed in the first half for two naïve challenges and as he trudged disconsolately off the Vicarage Road turf, Chelsea’s fans proceeded to chant ‘you’re f***ing s***’ on a loop until he entered the tunnel. Enough was enough, Bakayoko had not got to grips with English football.

Is there still a player in Bakayoko?

Bakayoko turned heads with his performances during the season before for AS Monaco, particularly in two standout displays against Pep Guardiola’s Manchester City with the world watching. Funnily enough, there were rumours of United making a second hijacking move on Chelsea, after the Red Devils beat them to the purchase of Romelu Lukaku from under their noses.

We all know United need new blood in midfield, but I suspect you will be hard pressed to find anyone who is nodding in approval at the Bakayoko links. Chelsea have midfielders in abundance but even so, he did not pull up any trees on moving to England.

We cannot even go down the route of he could be the enforcer that liberates Paul Pogba, when chances are he will not be playing in Red for much longer.

It would be an incredibly left field move and, personally, I cannot see this story having any legs.