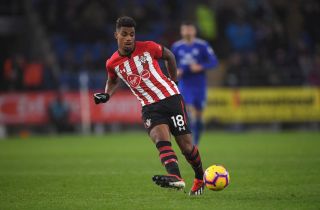 The 25-year-old has been left out of the Saints’ pre-season tour to Austria and has has publicly expressed his desire to leave this summer.

“I want to start afresh so why not let me leave,” Lemina said this weekend as quoted by the Times.

The Times report that the Reds have been given permission to speak to Lemina over a potential transfer. Southampton are said to want their money back in a deal for the player they signed from Juventus two seasons ago.

Lemina has struggled for regular first team Premier League starts for Southampton and some fans have questioned whether he has the ability to step up for Ole Gunnar Solskjaer’s side.

However, some Reds on twitter have pointed to Lemina’s asking price and see him as an adequate and far cheaper option to young Newcastle midfielder Sean Longstaff.

Check out some fan reaction below:

This is typical of MUFC right now. https://t.co/YMTLW8VEPX

£18m for Mario Lemina is a deal Manchester United should be all over. Still need Bruno Fernandes, but that's a steal and a good squad addition.

Wait, Southampton only want £18 mill for Lemina? How does that work? Hasn't he got 3 years left? Seems like a no brainer.

£18m for Mario Lemina, what are we waiting for? Get that deal done with Bruno Fernandes and keep Paul Pogba for one more season.

People coming round to this Lemina signing now…..Don't be fooled. He's cheap and that's why United could be looking at him. If he was first time for Southampton and a fantastic prospect worth 50 million we wouldn't be interested

Lemina? Not world class but certainly much more accomplished than Longstaff and will be a lot cheaper because he’s not British. I’m taking it for sure. We need 3 midfielders if Pogba leaves as well, so if we add a Fernandes / Milinkovic-Savic to it as well, I’m happy. #mufc

I think I understand why United are in for Lemina.

Ole: ‘How about Yerry Mina?’

Ed: ‘Lemina? Never heard of him, but he sounds cheap!’

Lemina gives us great squad depth so I’m all for it.