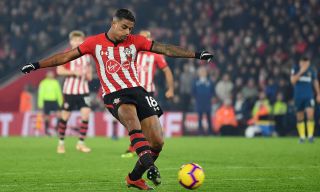 Manchester United have been given permission to speak to Southampton midfielder Mario Lemina.

This comes from the Times, who claim Arsenal have also made an enquiry about the possibility of signing the Gabonese international.

Lemina was left out of the Saints’ pre-season tour to Austria by manager Ralph Hassenhüttl and is desperate to leave St Mary’s this summer.

“I want to start afresh so why not let me leave,” Lemina said this weekend as quoted by the Times.

The 25-year-old made just 18 Premier League starts last campaign, and it now looks clear that he will leave Southampton this summer.

Lemina would represent a cheaper option than the figures quoted for targets such as Newcastle youngster Sean Longstaff.

The Evening Standard claim that the Saints are looking to get the £18m back they signed Lemina for from Juventus.

This signing would add depth to Solskjaer’s options in midfield, but can Lemina really make a significant improvement to the United squad which is so desperately lacking in the centre of the park?