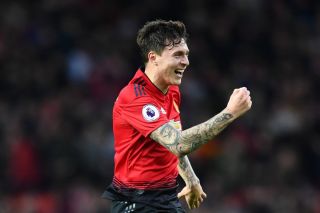 The Sweden international is currently in Australia with United for the first leg of their pre-season tour.

Lindelof was one of United’s most improved players during a bad season and if he continues going that way we could have a top defender on our hands at Old Trafford.

This week Mundo Deportivo spoke to Lindelof’s agent Hasan Cetinkaya, who said: “Lindelof is in the orbit of a great European club, but leaving United depends on the English club.”

Does that suggest Lindelof is keen on leaving the club or are we reading too much into it?

It leaves a horrible taste in the mouth how talks up his client for attracting interest from ‘a great European club’ when Lindelof is already playing for one.

MD also reported that Barcelona have tried to sign Lindelof on more than one occasion.

Moreover, the interview with Cetinkaya took place during the unveiling of Frenkie de Long at the Camp Nou.

It has been suggested that Lindelof could be Barça answer to missing out on Netherlands international Matthijs de Ligt.

United were said to be in on the chase for De Ligt’s signature but his future has yet to be resolved.