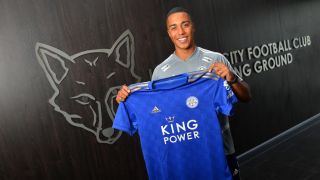 Manchester United reportedly held informal talks over a transfer swoop for Youri Tielemans before he joined Leicester City instead.

As reported by Sky Sports yesterday, Tielemans completed a £40m permanent move to the King Power Stadium after a spell on loan with The Foxes last season.

The Belgium international had a decent spell in the Premier League and you can be sure Leicester fans will be excited about seeing him in action again, next season.

Brendan Rodgers could be getting an absolute bargain at £40m.

The tweet below from Belgian journalist Kristof Terreur claims United considered Tielemans as a replacement for Paul Pogba.

Tielemans was offered to Spurs, but they had other priorities. There were informal chats between Man United and agent about him as a possible replacement for Paul Pogba, but they never made an offer. No priority either. Leicester were the only one that really went for him.

When you read and consider the figures being touted for Newcastle midfielder Sean Longstaff, this is a really good deal for Leicester and it’s a surprise that we never made an official offer.

Tielemans would have made a positive difference at United but we’ll probably end up with some lad who has only made 9 senior appearances for Newcastle — for half of what Tielemans cost!