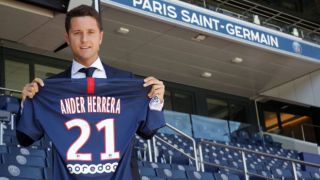 Last Thursday, the worst kept secret in football in 2019 was publicly confirmed, as Paris Saint-Germain announced a five-year deal to sign free agent Ander Herrera, whose contract at Manchester United expired at the end of June and therefore allowed him to move clubs.

Herrera’s Instagram story on Friday was heartwarming for the United faithful who have supported him for years, as he said the following:

“Thanks to all United fans that are wishing me the best in my new chapter,” Herrera wrote.

“You are still supporting me even when I am not at the club anymore, thanks a lot from my heart, I have no words.”

READ MORE: Opinion: Man Utd are the toughest club to read in the transfer market

Herrera’s love for United has been publicly proclaimed by the player himself since he joined, but after his actions in recent months, his words feel mistimed and hollow.

I respect the 29-year-old, one of my favourite players since Sir Alex Ferguson left United, for accepting a better deal at a currently better club where he is almost certain to win titles.

I understand if he feels as if United’s board do not show enough ambition, or if he felt undervalued by the club.

However, he makes matters seem as if he was forced to make the decision to leave, when in reality, he had an offer on the table at United where he would earn more money weekly than most of his fans earn in a year.

Herrera was a fan-favourite during his time at United and largely escaped the brutal criticism directed towards most of his teammates during and after the dire 2018/19 campaign.

It is, again, perfectly acceptable that he wanted to swap Manchester for Paris, but now, he’s rubbing salt in the wounds of the fans who did not want to see an important player depart the sinking ship.

Herrera could have become a leader for the club in a difficult time if he put pen to paper and matched his words with his actions.

Instead, he leaves United in need of a replacement for him alongside the half dozen additions already sought after by Ole Gunnar Solskjaer.