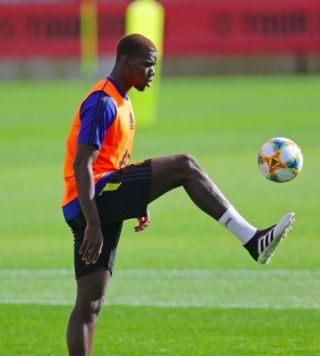 Pogba has been public in his desire to leave Old Trafford this summer and has said he is ready to seek a new challenge elsewhere.

The Frenchman has been heavily linked with a move back to Turin to join Maurico Sarri’s Juventus, as well as Real Madrid to join up with compatriot Zinedine Zidane.

However, Stone’s tweet below suggests no offers have been made from these European giants for Pogba.

United boss Ole Gunnar Solskjaer still sees Pogba in his future plans next season and the club are not panicking over reports over his exit.

No bids received by @ManUtd for Paul Pogba. No negotiations. Club calm about situation. Still believe he will be with them this season. In present market would price be beyond £150m? Ole Gunnar Solskjaer presser tomorrow lunchtime. At least he knows what main topic will be.

It’s interesting that no bids have yet been made for Pogba despite his evident desire to leave. The Reds should ,however, sell the midfielder if a suitable offer does come in, given he has shown no commitment to staying at Old Trafford.

Stone’s tweet also raises a key question: just how much would Pogba be worth in this market? United should be looking for over £100m for the World Cup winner, which must be reinvested in what is currently a very weak squad.

Solskjaer should be looking at signing two midfielders before the window shuts on August 8th. Southampton’s Mario Lemina is the latest midfield option linked with the club, with the Times reporting that United have been given permission to speak to the Gabonese international.