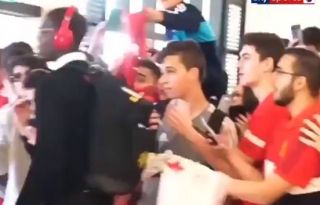 Paul Pogba took some time to meet and greet Manchester United fans as the team arrived in Perth for the start of their pre-season tour.

The French midfielder has been strongly linked with a move away from Old Trafford. Real Madrid and Juventus are said to be interested in Pogba, which comes as a surprise considering his inconsistency. Perhaps they feel he will adapt better to a different league, as he did with Juventus in Italy, albeit with much better players surrounding him.

Whatever happens with the midfield ace, he is set to leave United under a grey cloud. And there will be no returning this time.

Pogba is looking a bit glum in the video footage below, though it could be tiredness from the fight to Australia from Manchester.

That could have a lot to do with being distracted.