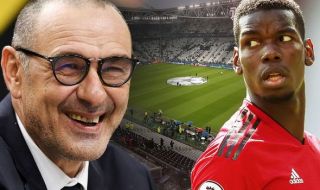 Juventus are said to be preparing a bid of around £120m as they attempt to bring Paul Pogba back from Manchester United.

The France international has been unsettled at Old Trafford for some time and there is plenty of speculation about his future reaching the gossip columns.

Pogba’s agent, Mino Raiola, has only added fuel to the fire by saying his client is in the process of getting himself a move away from the Red Devils. He is quoted in this piece by The Times which also claims Juventus are lining up a huge offer for the World Cup-winner.

The Italian giants are desperate to win the Champions League again and have made several big signings in recent years to gain ground on their European rivals. Cristiano Ronaldo’s arrival last summer didn’t see them get any closer though.

Whether Pogba is the missing piece of the jigsaw remains to be seen, but Real Madrid won’t let him return to Turin without a fight.

At United he’s been a disappointment and never appeared to be settled in Manchester after coming back in 2016.