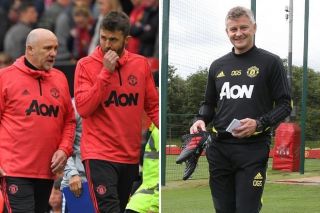 The players are only back training but reports are already surfacing about the negative mood in the Manchester United camp.

I guess when Ole Gunnar Solskjaer said certain players won’t be here for the coming season he thought the club would back him and make it happen.

Jokes on Ole, as José Mourinho would say.

READ MORE: Why five Man Utd players have not gone on pre-season tour

According to Mark Ogden of ESPN, some of the club’s foreign players are concerned that Solskjaer is lacking in ‘continental expertise’ and that he put too much of an emphasis on building fitness during training sessions at Carrington last week.

The irony of that – if it came from a player or more – considering how clear it was last season that our fitness wasn’t up to scratch. It sounds like they learned nothing from last season and will continue to act up, adding even more pressure to the job at hand for Solskjaer.

Maybe Solskjaer does have an issue and those complaining are making a valid point, but it’s getting tiresome now that the same players are the ones making excuses time and time again. It’s baffling they’re still at the club and paid hefty wages.