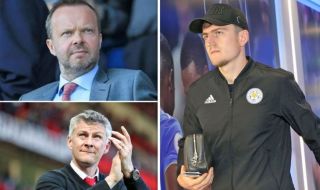 Manchester United are the toughest club to read in the transfer market. The club are linked with so many players over the course of the summer that are mostly made up for clicks.

‘United miss out on another transfer target’ is the most likely headline you will see online.

The Red Devils name seems lobbed in to any players transfer dealings when, either, we were interested at one point or never at all.

Matthijs de Ligt is a player that falls directly in to that category. I think it’s obvious the club were interested at some point but his destination seemed pre determined long ago. Once to Barcelona but now increasingly likely to Juventus, as reported by talkSPORT.

Sean Longstaff has been a speculated target for longer than the Aaron Wan-Bissaka deal took to compete.

United seem to drag transfers out for the best deal but in the long run it seems to have hampered getting other deals done.

A rejected bid for Harry Maguire last week with no new updates suggests a new bid is being considered or the club has walked away from the deal.

What we really know about transfer deals is very little in the grand scheme of things. All we actually know is what has been reported but how reliable each ‘source’ is anyone’s guess.

Believing one ‘source’ over another really isn’t bringing any clarity to the situation. Some will embellish and others will piggyback on that rumour until it becomes ‘fact’.

What we do know is that United should be further along the line with its transfer dealings then it already is.

The club have a far more urgent need for incomings than ever before in my opinion.

I have said in previous opinion pieces that this summer is our most important since Sir Alex Ferguson retired.

How far have we got to fall before we take action in the transfer market?

I know you can’t solve your problems by spending your way out of trouble (we have proved that in the past) in one window but our situation demands more action.

The Theatre Of Dreams is in need of new blood and has stagnated with the rotten core that is the current squad.

Speaking of rotten cores that brings me to Romelu Lukaku and Paul Pogba. They have openly flaunted their desire to leave which is really disappointing when we could use their help. We need players who will stay and fight and these two players lack the character to achieve that. Let’s not take away what talented players they are but also let’s acknowledge what they are doing to the club in their lowest moment.
Pogba says he wants ‘a new challenge.’

What about helping the team with the challenge of getting out of this mess you were part of putting us in?
Pogba has showed time and time again he isn’t the man the team can rely on. In fits and starts we have seen his best but all too often he hasn’t done enough.

‘He hasn’t got good enough players around him’ I read from other Reds. I’m going to reiterate what I have before, lesser players in lesser teams have got more out of their teammates than Paul Pogba. For me, he is not a leader, he is not a fighter and he only has his own interests at heart. He has proven that over and over when it comes to the crunch in a Manchester United shirt. He is proving it now himself and through his agent. Do the fans really want someone like that at this club? When we really need the squad to dig in and fight to get somewhere close to an exciting team again, can we really trust a guy who publicly has said he wants to leave?

It’s the same story with Romelu Lukaku. Flashes of potential but nothing sustainable throughout a whole season. Rom’s last goal for United was in Paris on March 6th after that he had a decent half against Chelsea. That’s it.

A deal to Inter Milan seems like it would be complicated but not impossible. Lukaku seems keen to play under Antonio Conte and Ole seems to favour other striking options so hopefully something can be agreed so we can all move on.

Pogba’s seems likely to move to Real Madrid and join Zinedine Zidane but whether these deals get done this window or next will be interesting. Can the club really sell both and be trusted to replace them before the deadline on August 8th?

Also, these potential transfers away from the club could have a direct affect on our transfer dealings to bring players in. So everything is far from clear with just over a month until the transfer window closes.
Our seemingly lack of transfer activity is currently mirrored by our top 6 rivals though. Arguably, their need isn’t greater than ours and Manchester City are the only other team to make a significant signing in Rodri from Althetico Madrid.

Liverpool have signed Sepp van den Berg but no one, as yet, for immediate first team action.

Arsenal, similarly, have brought in a young Brazilian striker, Gabriel Martinelli, but you wouldn’t think he would challenge Lacazette or Aubameyang just yet.

Chelsea’s transfer embargo has limited their options but they have Christian Pulisic and Mateo Kovacic as permanent fixtures this season. Frank Lampard will inherit an arguably stronger squad than Ole Gunnar Solskjaer did and the two will meet the opening day of the season.

Lampard knows what squad he will be working with this season. The embargo and the early departure in the summer of Eden Hazard has dictated that.

Ole mentioned in an interview with MUTV that the club were working on one or two signings, as per The Independent.

Looking at the squad travelling to Australia and it’s clear we are not in great shape.

What additional squad members we end up with by close of play on 8th August at 5pm is anyone’s guess.

Speculation will continue, we will wait and hope the club can provide some much needed additions this summer.