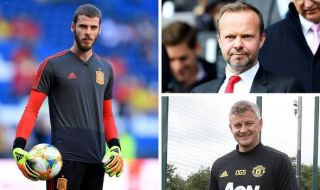 According to The Mirror, David de Gea is set to commit his long-term future to Manchester United.

The report claims he is ready to agree a five-year deal to stay at Old Trafford on a staggering £350,000-a-week, which will make him the world’s highest paid goalkeeper.

Talks have been ongoing for some time so it may be advisable to hold in the excitement for now, when talks can derail quickly.

De Gea currently has a year left on his current deal, so United really need to get their act together and tie him down sooner rather than later.

While he had a difficult end to the season last term, United fans are happy he’s set to stay on, with many taking to Twitter to share their thoughts on the latest reports.

Give him the armband!

Make him captain too #mufc #ggmu

Now that’s some freaking good news if it happens