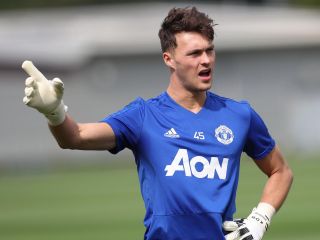 The 23-year-old has been at Old Trafford since he was 8-years-old and has since made his way through the Academy ranks at Carrington. He has also made his name known in the Republic of Ireland Under-21 side, so the next step is cracking into that first team.

Burton manager Nigel Clough believes O’Hara can replicate the form of Brad Collins last season, the keeper they had on loan from Chelsea who made a big impact.

“He is very similar to Brad,” Clough told the official Burton Albion website. “He had a very good year last year in League Two and he’s ready to make the step up to League One.

“You look at the scale of Macclesfield’s achievements last year and clearly there must have been some people doing extremely well for them and he was certainly one of them. For them to stay up was incredible and he played a major role in that.

“He will come in feeling confident and with the pedigree of being at Manchester United for a number of years and he fits the bill.

“This is the next stage for him, and we want to help him get into the full Republic of Ireland squad as well.

“How well Brad did here last year has helped us (to secure the deal), the young team we have here, the way we played the second half of last season – all those factors come into play.

“He was our first choice all along and I’m delighted we have got the deal done.

“The balance was right in the goalkeeping department last season and we have that again now.”

On joining Burton, O’Hara said: “I’m ready to step up to that next level and show that I’m more than capable of climbing the leagues and reaching, hopefully one day, the Premier League.

“I hope I can play regularly and put in top performances for Burton. If that’s recognised, hopefully that will help me make the next step of becoming a full senior international.”