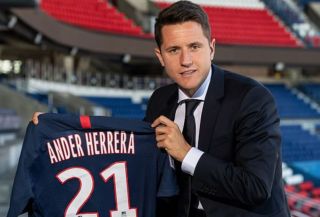 The Spain international’s contract expired so he left Manchester United on a Bosman this summer.

PSG will now make use of Herrera’s services on the pitch, but there’s a feeling United have lost one of their few leaders on the pitch.

But the former United midfielder has hinted he and fellow Spaniard Juan Mata could form a management team when they retire from playing.

Mata is a bit older than Herrera, so maybe he will get to retire early and make a move on earning all of his coaching badges.

In an interview with Marca, Herrera spoke about forming a management partnership with his former Man Utd team-mate.

“As for the tandem with Mata we have talked about this a long time,” Herrera told Marca. “I think we understand football in a similar way, but maybe I’m a little more intense than him, a little more passionate at times.

“Maybe we could form that tandem and he would give me that calm that at times maybe I’m very impulsive.

“Time will tell, but he is a friend for life, I am fortunate to have found it in my career because we understand football and life in a similar way. We believe that football is a team sport and is something in which we all have to do our bit to achieve the objectives.

“In any case, I do not know if I will be a coach because I think it’s a very difficult position. We will see the time what it says.”

Who knows, the Spanish duo might have a successful career in management yet.

And no surprise to hear Herrera is the crazy one out of Mata and himself! He’s bonkers while Mata seems a lot more calm and collective.