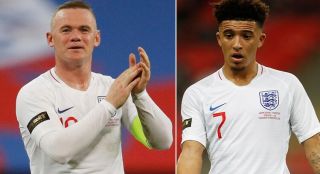 Sancho is a mercurial talent and one of the most highly-coveted young attackers across Europe. The 19-year-old scored 13 goals and contributed 15 assists for Dortmund last season, making himself a regular in Gareth Southgate’s England squad.

Sancho has been constantly linked with a move away to a host of top European clubs, with the Independent even reporting earlier in the summer that Old Trafford was the youngsters most likely destination if he was to leave Germany.

The report claims it would take a club record £100m to bring Sancho to United.

However, former striker Rooney believes Sancho may be best staying put for the time being.

“Dortmund is a great club with great fans, they trust their young players and you can see that in Sancho and the progress he has made in the last 12 months. It’s fun to watch him, he’s doing really well at BVB,” Rooney told BILD as sourced by bvbbuzz.

“Now Jadon has to ask himself whether he would get the playing time he gets in Dortmund when he moves to England, or would he just sit on the bench? Playing time is so important for a young player like Jadon, so if he gets the most playing time in Dortmund, he should stay there.”

Rooney is right that it is key that Sancho continues getting regular first team football to continue his development. However, this would surely not be a problem that Old Trafford where there is already a lack of quality options in attack.

Sancho would be a key player under Ole Gunnar Solskjaer if he was to make a move to the Reds, but it looks like the Englishman will continue his development at Dortmund for at least another season.