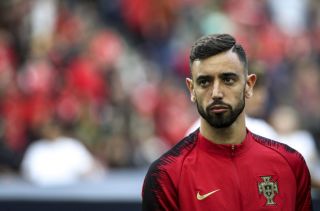 According to Portuguese outlet Correio da Manha,  , as translated by Sport Witness, Fernandes remains calm over a transfer despite few recent updates over his future.

The report claims the Reds are currently ‘formulating a proposal’ for the midfielder, who has return back from pre-season training following his role in Portugal’s inaugural Nations League triumph.

Tottenham are also said to be interested in Fernandes, though their approach is likely to depend on the future of Christian Eriksen.

Fernandes’ agent Miguel Pinho is flying between Portugal and England to try and thrash out a deal for the player, but it does not look like negotiations between United and Sporting are yet at an advanced stage.

Manager Ole Gunnar Solskjaer needs two midfield signings this summer following Ander Herrera’s departure and uncertainty over Paul Pogba’s future at the club. Fernandes would be a fantastic creative addition given the side’s inability to score goals for large parts of last season.