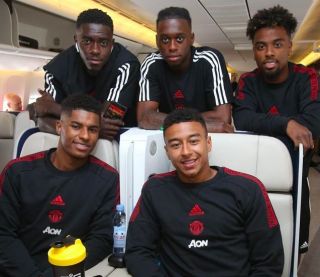 Manchester United players have been posting pictures on social media as they fly out to Australia for the club’s pre-season tour.

The Reds have flown out ahead of games against Perth Glory and old rivals Leeds United down under.

It will be interesting to see how Ole Gunnar Solskjaer’s first pre-season campaign as United boss will pan out. One thing that should be guaranteed is that it can’t be any worse than last season’s under Jose Mourinho which looked like the beginning of the end of his reign just as the tour of America started.

Mourinho bemoaned the lack of incomings that summer, and the Reds still go into this tour without the centre-back signing that the Portuguese manager was so desperate for.

Promising new additions Aaron Wan-Bissaka are both in the pre-season squad this time out though, with more optimism around the club.

However, Solskjaer still requires a couple signings yet, with a central defender and central midfielder still necessities.

The Norwegian has taken a young squad and it will be interesting to see the side he selects for Saturday’s opener against Perth Glory.

See snaps of the players and coaching staff below: