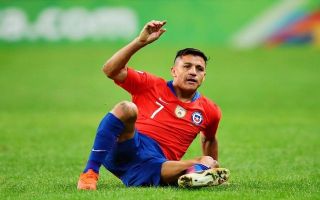 Alexis Sanchez had a good Copa America by his own standards of late, but the out-of-favour star got injured in Chile’s Copa America third-place playoff clash against Argentina yesterday evening.

Sanchez was forced off the pitch after 17 minutes of play.

According to BBC Sport, the Manchester United attacker limped off with a hamstring injury. The last thing we wanted to hear before the lads head out for their pre-season tour today.

Sanchez has been a flop since his switch from Arsenal in January 2018 and according to Goal, he is one of the players United would happily sell this summer if they could find a buyer.

The club should be looking to get his crazy wages off their books, but it’s been made more difficult now by Sanchez getting injured.

Check out some of the reactionary tweets to Sanchez’s injury below.

This guy is just a Liability to this Team, can you imagine

When isn’t he injured

Another who needs to be shown where the door is.

Sanchez is so injury prone it’s actually annoying! We should literally get rid of him n cut our losses fuckin hell.

United were always going to find it hard to sell Sanchez this season.

Nobody will match those wages so the player himself can decide to stay, even if United don’t want him to as he’s still under contract.

But this is not the setback he wanted before meeting up with his United team-mates to prepare for the new season.