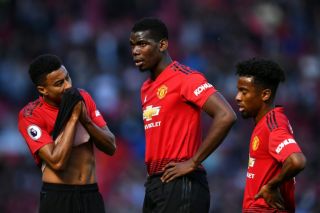 Apparently Manchester United don’t fully know if Paul Pogba will show up at the airport this evening when they board their flight to Australia for the first leg of the pre-season tour.

Apparently Manchester United are not sure if Pogba will turn up at the AirPort today for their Tour.

A club that has developed some of the finest over generations being held to ransom. Very sad.

Pogba has been long linked with a summer move away from Old Trafford and these theatrics would see him show the club the utmost disrespect.

The World Cup-winner has never come out and publicly committed his future to the club over the past two years, so we shouldn’t be surprised by claims he wants to leave the club.

That’s fine – wanting to leave – but it’s how he’s going about it.

By not showing up at the airport today, Pogba is throwing his toys out of the pram and that behaviour shouldn’t be tolerated by a senior player.

United reportedly have no intention of letting Pogba leave amid interest from Real Madrid and Juventus, according to Manchester Evening News.

United have no intention of letting Pogba leave amid interest from Real Madrid and Juventus. #mufc [MEN]