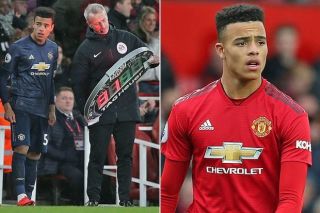 Four Four Two have picked one young prospect from every Premier League team who can be a breakthrough start for their club next season.

It comes with little surprise that the outlet picked Mason Greenwood for United.

The 17-year-old striker is destined for a bright future. The 17-year-old made his debut for the Red Devils under Ole Gunnar Solskjaer and he could be in line for a string of first-team opportunities for the upcoming season.

Reflecting on what the future holds for Greenwood, Four Four Two said: “With Ole at the wheel, prospects for the teenage contingent at Old Trafford improved overnight.

“Greenwood’s cameo in Paris for United’s memorable Champions League comeback victory against PSG will live long in memory for the forward.

“The 17-year-old enjoyed a hugely productive season, notching 42 gaols and assists in just 19 appearances for United’s academy sides and prompting Solskjaer to beam in April. If the Norwegian is good to his words, 2019/20 could be a breakthrough year for the boy from Bradford.”

The future will be bright for United if the club can continue to develop players like Greenwood.

Solskjaer clearly believes in the youth so Greenwood and co will know they’ll get opportunities as long as they remain patient.

Diogo Dalot is another player who will be hoping to get more time on the pitch next season.

Another raw talent, the Portuguese full-back has what it takes to become a very good player but time will tell if you have the dedication.

United may have signed Aaron Wan-Bissaka from Crystal Palace, but Dalot could now look to change position and play further up the pitch. Solskjaer has already played him on the right wing.