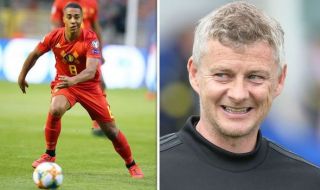 It sounds like Manchester United have missed out on the signing of Youri Tielemans and it’s claimed he has arrived in England to complete a £40m transfer from AS Monaco to Leicester City.

We saw glimpses of the 22-year-old during the second half of last season when he initially joined Leicester on loan, and it would be fair to say he was an instant hit scoring three goals and recording five assists in 13 Premier League appearances.

Tielemans has Premier League experience under his belt, so The Foxes know what they’re getting as Brendan Rodgers looks to guide the team up the table to compete in European competition.

According to The Sun, the Belgium international has arrived in England and is set to secure his return to the King Power Stadium.

The news may come as a blow to United, who we’ve been linked (via Sky Sports) with the playmaker this summer, but surely if Ole Gunnar Solskjaer really wanted Tielemans, he wouldn’t be about to join Leicester…

Tielemans could have been a viable solution to help fill the void, if United are to sell Paul Pogba after seeing Ander Herrera run down his contract and sign for Paris Saint-Germain.

Leicester are getting a good player. One I have no doubt would make make a positive contribution at United.