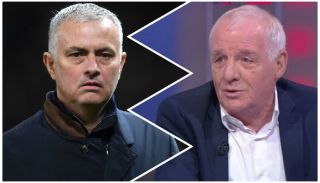 Former Millwall player Eamon Dunphy is a prominent voice on football in Ireland. He’s had strong opinions for and against Roy Keane down the years and has been critical of Paul Pogba and José Mourinho in the past.

In an interview with SB Nation (The Busby Babe), Dunphy says: “After Ferguson, then the succession thing which Liverpool mastered for a while, Shankly, Paisley, even to Joe Fagan, Joe won something, but succeeding someone like Ferguson who was so dominant, such formative influential figure is very difficult and they don’t come along easily.

“He [Ferguson] picked David Moyes and David is a very good manager, a good man, but they never really gave him a chance and maybe it was too big for him. You need big characters.”

That line about characters shines the light on our previous manager José Mourinho. Some time ago he was one of the biggest personalities in the game, but something has changed and you can tell Mourinho isn’t happy about it.

Dunphy refuses to believe Mourinho was the character needed, adding: “Mourinho had gone when he went there. He had had that scene at Chelsea. He doesn’t have the character. You talk about character – he doesn’t really have it. He is vain, he is tempestuous. It’s all about him, him, him. So they are in a death spiral now. They don’t know what to do and they don’t really have.

“They may have the money – which they don’t spend, the Americans [Glazers] don’t spend on the scale that they should do – but they don’t have Champions League football. Pogba wants to leave. De Gea. You saw the effect on De Gea last year at the back end of the season, and the rest of them are… way out of it… That Pogba thing.”

Even if people don’t wish to acknowledge Dunphy, he makes some good points about United now and credit to him for voicing his views on the Glazers. They make a mockery of football in England and have turned United into the ultimate cash cow, greedily sucking money out after inflicting large debts on the club.

Mourinho couldn’t motivate a group of players who should be equally to blame for not being able to motivate themselves.

A football manager’s job is to coach his players and try make them all the best they can be.

You can lead a horse to water, but you can’t make him drink it.