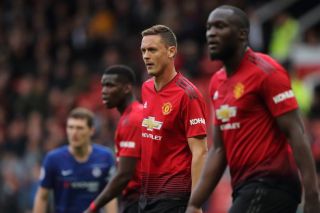 According to Mark Ogden of ESPN, Nemanja Matic wants to talk with Ole Gunnar Solskjaer about his Manchester United future after being made aware of interest from Serie A outfits Inter and AC Milan.

ESPN allege that sources have told them that Inter have indicated a willingness to offer £10m plus Belgium midfielder Radja Nainggolan for the Serb, who was signed from Chelsea under José Mourinho’s orders.

Matic’s form dipped significantly and are needing a new look midfield to take them into this new era under Solskjaer.

READ MORE: Deals for Man Utd duo as Solskjaer looks to shape his squad for next season

Apparently Matic is keen to discuss the interest from Italy with Solskjaer to properly evaluate his situation.

United are due to fly to Perth, Australia on Sunday for the beginning of their pre-season tour. They also travel to Singapore and China later on.

Matic will travel with the squad unless anything drastic happens between now and then.

The Red Devils should be looking now to replace Matic with West Ham midfielder Declan Rice. The England international is younger, more versatile and has a very bright future in the game.