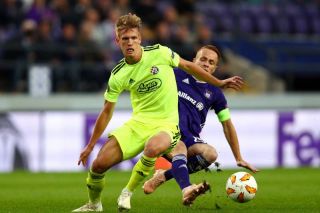 Manchester United are reportedly set to lose out in the race to sign Spain u21 international Dani Olmo.

Olmo starred in this summer’s u21 European Championships, helping his nation win the tournament.

The 21-year-old currently plays for Croatian side Dinamo Zagreb, where has two years left on his current deal.

And according to reports in Spain, Tottenham are now ‘close’ to signing Olmo after agreeing a deal with the player’s agent Juanma Lopez, despite reports the Reds were interested in his signature.

Muchodeporte, as cited by the Metro, claim that Maurico Pochettinho’s side are on the verge of completing a £22m deal to sign the midfielder .

Olmo would have fit United manager Ole Gunnar Solskjaer’s profile for potential signings; at just 21 he is still young and came through Barcelona’s academy system so has plenty of pedigree.

But if these reports are to be believed, the Reds are about to miss out on Olmo this summer, with Spurs looking to add the Spaniard to their growing list of midfield options following the signing of Tanguy Ndombele from Lyon.

The Reds meanwhile, still need to sign at least two midfielder’s this summer. Ander Herrera’s exit has left another gap in what was already a position that needed addressing by Solskjaer.

The Norwegian was said to want all his business done before the club fly out on pre-season tour to Australia this week, but only Daniel James and Aaron Wan-Bissaka have so far been confirmed.