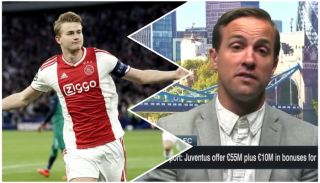 De Ligt has been heavily linked with an exit from Ajax this summer after an incredible campaign which saw the Eredivisie club reach the Champions League semi-finals.

The Red Devils have shown interest in De Ligt but the 20-times champions of England are not alone, with Paris Saint-Germain, Barcelona and Juventus all strongly linked.

However, Juventus are trying to negotiate a deal in their favour, with an opening offer reported at just €55m with another €10m to be paid in add-ons.

Laurens claims Juve are attempting to lower the price as they look to improve other area of the team, now managed by former Chelsea boss Maurizio Sarri.

“Maybe at some point the money will run out after some of the deals that they’ve done and the ones that they are hoping to make, like Maurio Icari for example, like Paul Pogba as well,” he told ESPN FC.

“Maybe they’re thinking ‘do you know what, we can try to lower that deal because De Ligt is clearly willing to come to us more than Paris, more than Barcelona for example, or whatever else.’”

Going off what Laurens says, the Italian champions are running the risk of losing out on the defender.

He claims Ajax have agreements in place with both United and PSG and they may try to sell their skipper to those clubs instead – unless Juventus offer the right amount to get the deal over the line.

“I think there’s a chance where Ajax will lose a little bit of patience and say ‘hang on a minute, PSG agreed, Manchester United agreed. In that case we stop talking to you and De Ligt can choose between the clubs that we actually have an agreement in place,” he added.

“It’s not really in Ajax’s interest to waste a bit more time about De Ligt.

“They want the money in, they want for him to go, he was great for them but now he’s decided that he wants to go.

“So they might well say ‘do you know what, we already have an agreement in place with some clubs, we’re going to only focus on them clubs and De Ligt would have to choose between those clubs because you’re wasting our time.’”