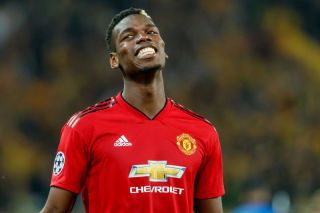 Mino Raiola has said client Paul Pogba is in the process of leaving Old Trafford this summer.

“Everyone knows the willingness of Paul to move on,”Raiola told the Times.

Many United fans will be glad to see the back of the Frenchman if he does get his move away, with Real Madrid and Juventus both heavily linked to the midfielder.

Pogba has already expressed his desire to leave to seek new challenges this summer and has shown little commitment to the club.

Ole Gunnar Solskjaer is adamant he wants to keep Pogba according to the Evening Standard, who may still fly out on United’s pre-season tour of Australia.

However, United should not keep a player clear not interested in staying against their will and it is the right time for the midfielder’s exit; albeit at the right price.

The Reds should sell Pogba and look to reinvest in what is already a weak midfield.

Check out some fan reaction to Raiola’s comments below:

1/2 We’ve all read Woodward’s (PR) email. What we also know is that Pogba has wanted out for roughly two years. This is a departure that should have been arranged one month ago, in a similar fashion to when Hazard left #CFC, or when Ronaldo left #MUFC in 2009.

#MUFC will fight to hold on to Pogba purely because of his commercial value, regardless of the disruption to our season ahead. If we had owners who put the club first, we'd buy Fernandes and sell Pogba for cash plus Bale. Our midfield is instantly upgraded + financial profit.

Pogba is desperate to leave, the problem is, nobody is desperate to sign him, he's overpriced & hasn't justified the price tag Utd paid never mind 100m +. Utd at some point have to respect themselves & end this circus, he needs to be moved on & a replacement signed immediately.

United's stance on Pogba not going is just plain embarrassing if it's true. He doesn't want to be here. It's been publicly leaked twice. You think the fans want a player like that here anymore? United is bigger than Pogba. Start acting like it and let him go

So Pogba is going and Tielemans about to sign for Leicester. Snooze you lose and United have been snoring for a month thinking Pogba didn't want to go

Sell Lukaku & Pogba for a huge fee and maybe get a player off Madrid. Invest that money wisely and strengthen our squad with 4/5 quality additions. That would be fine. Only problem is you can have no confidence that we’d spend that money wisely.

The thing I fear most about Pogba leaving is a lack of proper reinvestment. The transfer window closes earlier in England (9th August) than in Italy (18th of August) or Spain (2nd September).

There is only a month left to bring in two midfielders and “panic buys” are common.

Pogba will be sold for big bucks right at the end of the window so the yanks can trouser the cash without having to spend it.