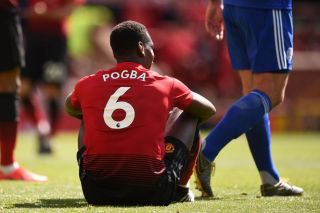 Former Manchester United striker Louis Saha is frustrated that Paul Pogba has expressed his desire to leave the club publicly.

Pogba was heard last month during a commercial tour of Asia saying he was willing to leave Old Trafford in order to seek new challenges.

“I am a bit annoyed by that, but what can you do?,” Saha told the New Paper.

“I struggle to understand why players express themselves (in this way). As much as they want to move, I understand that, but I don’t think it is something that should be done. I am especially gutted because he is a massive player for the club.

“I hope that he can still remain (with United), but it is difficult to see that because when you express something like this, it becomes a difficult situation to manage. It is not going to be easy for Ole.”

The latest news on Pogba tonight is that his agent Mino Raiola has told the Times the club are aware of Pogba’s stance to leave the club.

It is disappointing to see such an influential player clearly not committed to the club, but he should not be kept against his will and instead United should seek midfield replacements.

Pogba has been heavily linked with moves to Juventus and Real Madrid this summer, but Manchester Evening News reporter Charlotte Dunker still believes the Frenchman will fly out on the club’s pre-season tour.

Following Raiola's comments, understand United's stance on Pogba remains the same and they expect him to go on tour. The squad fly on Sunday. #mufc